The Visible Press are pleased to announce the newly available paperback edition of Film as Film: The Collected Writings of Gregory J. Markopoulos. 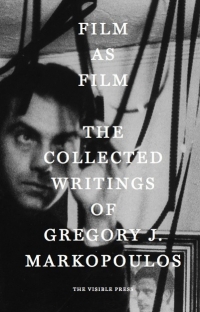 The 2014 publication of Gregory Markopoulos’ writings was greeted with widespread acclaim and celebration. As the original hardback edition falls out of print, we felt that it was necessary to keep these important texts available.

The new paperback has a slightly smaller page size (8 x 5 inches) and is 544 pages long. This edition is printed throughout in black and white, and does not contain the 16 pages of colour images that were in the original, but it does benefit from minor corrections and a revised filmography. All of the original texts are intact.

Gregory J. Markopoulos (1928-1992) is a unique figure in film history. As a contemporary of Kenneth Anger, Stan Brakhage and Andy Warhol, he was at the forefront of a movement that established a truly independent form of cinema. Later in life, the filmmaker pursued his ideal of Temenos, an archive and screening space to be located at a remote site in the Peloponnese where his epic work ENIAIOS could be viewed in harmony with the Greek landscape. The publication of Film as Film brought to light some ninety out-of-print or previously unavailable articles written between the mid-1950s and 1992.

Film as Film: The Collected Writings of Gregory J. Markopoulos can be ordered direct from The Visible Press, and should also be available through your local Amazon site. It is also being stocked by some of our partner shops.

The paperback edition is being printed digitally. The Visible Press maintains copies on hand for mail order and retail, but the book may be printed on demand if you purchase from other online sources.

Whilst we are very happy with the quality of this digital production, rest assured that we remain committed to producing new books with the same high quality and production values as our first three titles.

A handful of copies of the first edition hardback are still available. The book is now becoming collectable so we have increased the price to £50 to raise additional funds for Temenos and to support the continuation of The Visible Press. To purchase, please select “Hardback” from the pop-up menu on the order page.

The vital statistics for the paperback are as follows :-

Film as Film: The Collected Writings of Gregory J. Markopoulos
Edited by Mark Webber, with a foreword by P. Adams Sitney
The Visible Press, December 2014

For more details, or to place an order, visit The Visible Press shop.