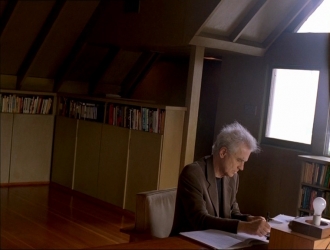 An excerpt from Thom Andersen’s newly written introduction to the book :-

Looking over this collection, I realize that what I miss is a manifesto. David James wrote one (in Allegories of Cinema) and Jonathan Rosenbaum has written several (in Movie Wars, Essential Cinema, and Goodbye Cinema, Hello Cinephilia). More are still needed because the cinema I value has become marginalized, at least in the U.S. Does it have a chance?

There is a myth that cinema has declined after reaching an artistic peak in the 1960s and early 1970s. This myth survives and thrives because the best directors today do not come from the traditional centers of film culture (U.S., U.K., France, Germany, Italy); they come from Portugal, Romania, Finland, Belgium, Argentina, Mexico, Thailand, Malaysia, Taiwan, China, Philippines, and Iran. Because of racism and nativism, their films receive little distribution or attention in the United States.

It is true, however, that the cinema is no longer at the center of our culture. But that culture has splintered. Pluralism rules. But, as Bill Cosby says to Robert Culp in Hickey & Boggs, lamenting the decline of their vocation as private detectives, “It’s not about anything.” Is this the postmodern condition?

But it is possible to contest and combat what Peter Wollen has called “totalizing Western postmodernism.” We need to make cinema about something. We need to be more radical. After all, as Lenin said, you can never be as radical as reality. So let us suppose everything we read about movies in the newspapers and magazines is a lie. The movies about which they write don’t matter. I’m not just referring to the comic-book work made for young people, but also to the movies reviewed in the New Yorker and The New York Review of Books. At best, these are the films we watch with pleasure and forget immediately afterward. Critics and reviewers must pretend that these films matter because so much money is invested in them. But, as Jean-Marie Straub has said, movies must be made as if money doesn’t exist.

Then there is television. Just before he died, Chris Marker told an interviewer, “The exponential growth of stupidity and vulgarity [in television] is a concrete quantifiable fact and a crime against humanity.” To put it another way, television is a bigger killer than tobacco. In its rhetoric, the propaganda of the most tyrannical government is less insulting than the ads we see on American TV today (including the so-called public service announcements). We waste years of our lives watching advertisements we don’t want and we don’t need, advertisements that insult us and try to make us stupid. We would be better off if we spent that time smoking; at least then we would have engaged in some thinking.

And often enough, the ‘content,’ as it is now called, is no better. If there is no life in ‘reality TV,’ what hope can there be for the rest? Television has achieved “the trivialization of everything” – and Noël Burch wrote that thirty years ago. How can it get worse? There is always a way.

We don’t need more masterpieces. We need work that is useful and work that is modest. We need work that acknowledges what we know but don’t believe. We need true and valid images in which we can recognize the world and its beauty; images that teach us about ourselves and our world. Not just an image, but an image that is just, to paraphrase Godard. Such work exists, and it demands of us who write about cinema our attention and our unyielding support.