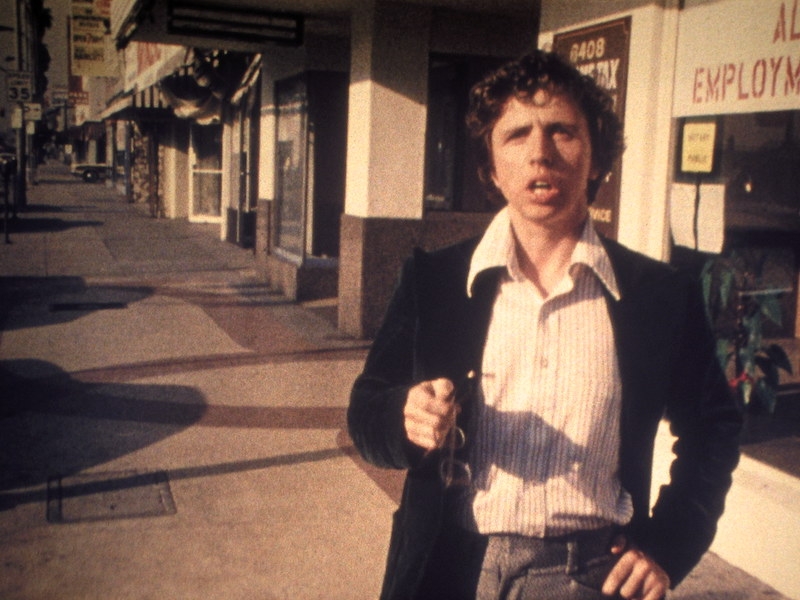 What’s Wrong with this Picture? Almost Everything

As a Jesus-fried guru of ontological-hysteric cinema, George Landow once asked, “What’s wrong with this picture?” Almost everything, in the case of The Desert People, a movie which will have its first—and probably last—Buffalo showing tonight at 8 p.m. at the Waterfront Community Center, 95 4th St., Buffalo, as part of a documentary film series sponsored by Media Study/Buffalo.

A frisson-inducing first impression is left by a rock ‘n’ roll muzak score so insipid it might have been composed by Mike Curb after an overdose of Elavil. This to accompany a series of highway tracking shots that stare over-insistently on the model name of the car the five main characters are riding in (Gran Torino) or lose sight of the car entirely and end up strobing over a broken white line. Against these charming distractions appear the titles superimposed in the manner of late Roger Corman or the Universal optical department in the days when every picture from that benighted studio looked like every other.

What follows this mindless credit sequence is nothing less than a biker movie about intellectuals—a genre with neither a past nor a future. Most of the film’s fifty or so minutes are occupied by five long monologues delivered by five mid-twentyish city-billies who have apparently just travelled together to the Papago Indian reservation in Southern Arizona where they spent five weeks. These monologues are punctuated by more highway shots, more benumbing rock ‘n’ roll, and brief sequences of desultory conversation among the five as they ride in their white Torino through those peculiar Southern Californian landscapes which seem to promise a murdered husband in every yucca-covered culvert.

During the monologues, the camera always manages to station itself too close or too far away from the speakers, and they are forced to unburden themselves of their experiences with the Indians in incomprehensibly distracting—or, at best, irrelevant—settings that could have suggested themselves as appropriate only to the most psychotic location scout. The first desert person to make his appearance, a scholarly sort who might be a fledged anthropologist, is filmed while he stands on the sidewalk abutting a commercial district street that might belong to a small town as easily as to the semi-urban shopping-center extensions of a metropolis. His attempt to relate what he has learned of Papago culture is compromised by several embarrassing revelations—he is finally led by the momentum of his words to confess that the Indians wouldn’t tell him any of their legends because he missed the folklore season.

The scene drifts to one of those sandstone and Plexiglas restauranterias which represent California’s most archetypal contribution to Western civilization and are now beyond the farthest reaches of descriptive prose. Here we meet the first of the two female people who sojourned with the Papagos, a pristined beauty with straight center-parted blonde hair and turquoise bracelet, nursing a cup of coffee in a back booth. A middle-class existentialist, she could pass as a Godard heroine whose brain had been rotted by too much transcendental meditation. But however profound her reticence, she is continuously upstaged by the insidious rapport between the green vinyl upholstery of this anomieous coffee shop and the reversal color stock, which is imbued with a fateful predilection for the rancid end of the spectrum. But she is treated with more sympathy than the other woman in the film—a journalist from an East Coast feminist mag, who must deliver her monologue in a composition dominated entirely by the foreshortened hood of her rented Chrysler. A composition perhaps appropriate for an old-fashioned macho automobile commercial, hardly so for a discourse on feminist consciousness among Papago women.

And the fourth speaker is placed in front of what appears to be a large hotel. Yellow taxis load and unload in the background, and a figure in an incongruous grenadier’s uniform complete with plumed hat keeps this traffic moving with over-expansive arm gestures. Finally we meet the fifth traveller, himself a Papago Indian now living away from the reservation, who served as guide to the others. He speaks of the necessity and difficulty of preserving the Papago culture, first in English, then in Spanish, and finally in the language of the Papagos. This soliloquy is characterized in the publicity handout as “very moving and emotional.” Perhaps, if you understand the Papago dialect. As he speaks, he is standing in what appears to be a sand-barren desert with perhaps a dry lake as a boundary—but why is that lifeguard tower lurking over there in distance?

I have been asked not to reveal the ending of the film, so I will only say that it is, indeed, schematic enough to be ruined by the telling. And I will add that the special form of oblivion reserved for desert people is so appropriately off the wall that this ruination would be a loss.

The perpetuator of this devious violation of cinematic proprieties is David Lamelas, who according to the sparse information made available by Media Study/Buffalo, is an Argentinian artist who has emigrated to the land of the lotus eaters and bitten the hand that soothes him. His talent is negligible. With The Desert People he has realized the movie Tom Laughlin might have given us were he a punk rocker instead of a billy-come-lately hippy. And not even Michelangelo (Antonioni) has captured so astutely as David the special banality of the Southern California landscape, which here appears as a single superhighway in search of some place (any place) to go.

Rounding out the program at the Waterfront Center are three one- or two-reelers which pose equally vexing questions about the intimacy between film and reality: I, An Actress by George Kuchar, the founder of the lumpen Hollywood sensibility which John Waters has made commercially viable; Accident from the National Film Board of Canada, a quite chilling reconstruction of a glider plane crash; and Werner Herzog’s Precautions Against Fanatics, which got the benefit of the doubt from me just for its title. I understand it was made by the same Werner Herzog who directed such worthy films as Aguirre, the Wrath of God, and Stroszek (which will be unspooled later this term in the Squire Conference Theatre). This is an “early work,” but had Herzog produced nothing else, his place in the history of the practical joke—if not the cinema—would be assured.

All in all, these movies make up a program that can be recommended to lovers of the eccentric, if to no one else. At the least, they demonstrate that oddball sorts can make films for less serious purposes than the solicitation of compassion for victims of UFO sightings.

Originally published in The Spectrum, an independent student paper of SUNY Buffalo, to promote a screening organised by Thom Andersen at Media/Study Buffalo in February 1978. The essay appeared under the pseudonym Aurora Floyd.