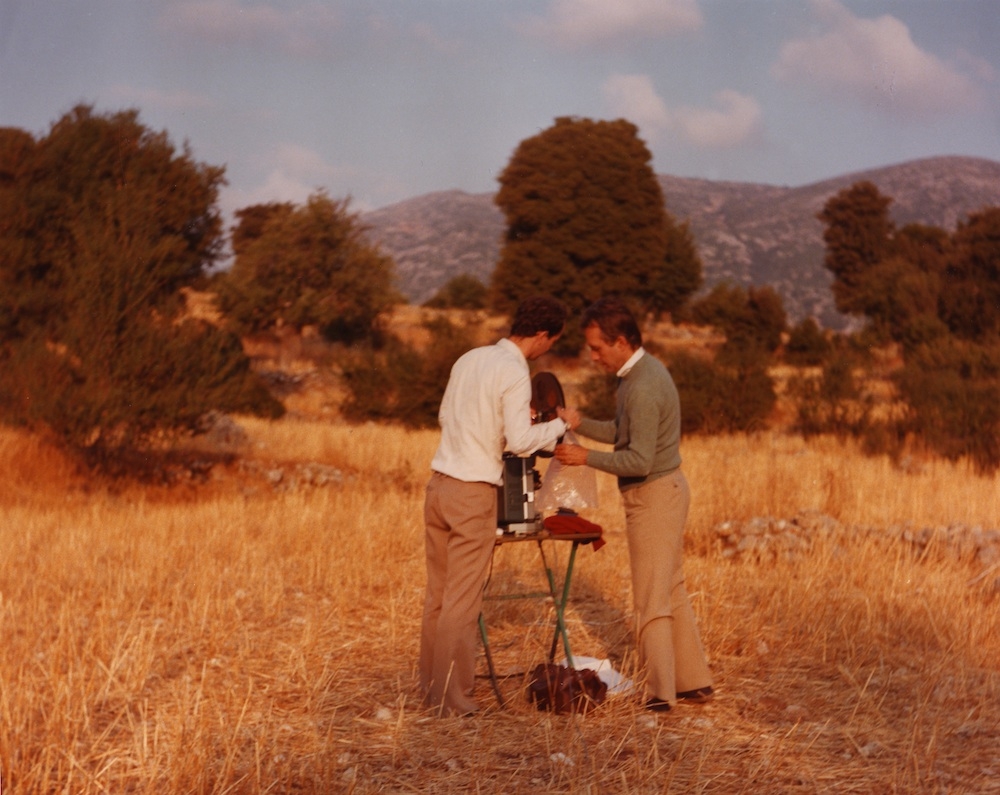 Gregory Markopoulos’ status as a leading figure of avant-garde cinema was affirmed by Twice a Man. This homoerotic adaptation of the myth of Hippolytus, set in 1960s New York, employs a radical editing style that integrates single-frame ‘though-images’ within its larger narrative. Five years later, Markopoulos and his partner Robert Beavers, left the US for Europe to pursue filmmaking in relative isolation. Beavers established a regular practice of filming in order to explore the potential of the 16mm camera. Early Monthly Segments is the result of this experimentation – an exhilarating process of discovery that also documents the daily lives of both filmmakers. By the 1980s, Markopoulos had begun to regard the Greek landscape as the ideal environment in which his work should be viewed. Daniël Singelenberg’s Temenos is a rare document of one of the annual presentations of ‘film as film’ at a remote site in the Arcadian countryside.

Twice a Man
Gregory J. Markopoulos, USA, 1963, 16mm, colour, sound, 49 minutes
Twice A Man is a fragmented re-imagining of the Greek myth of Hippolytus, who was killed after rejecting the advances of his stepmother. Markopoulos’ vision transposes the legend to 1960s New York and has its main character abandon his mother for an elder man. Employing sumptuous colour, the film radicalised narrative construction with its mosaic of ‘thought images’ that shift tenses and compress time. One of the touchstones of independent filmmaking, Twice A Man was made in the same remarkable milieu as Scorpio Rising and Flaming Creatures by a filmmaker named ‘the American avant-garde cinema’s supreme erotic poet’ by its key critic P. Adams Sitney.

Early Monthly Segments
Robert Beavers, USA, 1968-70/2002, 35mm, colour, silent, 33 minutes
“Early Monthly Segments, filmed when Beavers was 18 and 19 years old, now forms the opening to his film cycle, My Hand Outstretched to the Winged Distance and Sightless Measure. It is a highly stylized work of self-portraiture, depicting the filmmaker and his companion Gregory J. Markopoulos. The film functions as a diary, capturing aspects of home life with precise attention to detail, documenting the familiar with great love and transforming objects and ordinary personal effects into a highly charged work of homoeroticism.” (Susan Oxtoby, Toronto International Film Festival).

Temenos
Daniël Singelenberg, Greece, 1982, 16mm, colour, silent, 12 minutes
Dutch filmmaker and writer Daniël Singelenberg travelled to Greece for the early Temenos screenings. His personal documentary of the 1982 festival of Film as Film in Arcadia shows the preparation of the screening space and the idyllic landscape that surrounds it, and is one of the very few documents of Markopoulos and this unique event.