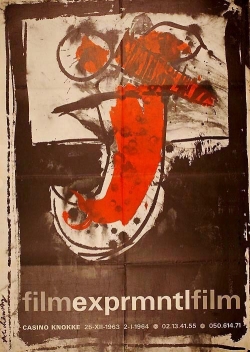 In 1963 Markopoulos won the Prix Baron Lambert (an award of $2000) at EXPRMNTL 3 for his film Twice a Man, and in 1967 Belgian patrons made it possible for the filmmaker to finish his epic The Illiac Passion. Jacques Ledoux was a faithful supporter who brought many Markopoulos films into the Royal Belgian Film Archive.

Almost 50 years later, a series of events in October 2014 will celebrate the special connection between Markopoulos and Belgium. Courtisane and the University of Gent will present an illustrated lecture by Mark Webber, to be followed by a projection of Twice a Man. In Brussels, the Cinematek’s newly inaugurated festival L’Âge d’or will screen four programmes based on the Markopoulos films in their collection.

The following introduction text is from the L’Âge d’or catalogue :-

“Gregory Markopoulos is one of the most important American independent filmmakers. From 1950-1960 he was one of the central figures of the New American Cinema Group along- side Jonas Mekas, Robert Frank and Shirley Clarke. Contemporary of Anger, Brakhage, Deren and Warhol, he significantly contributed to the establishment of cinema as an independent art form. During his career, Markopoulos developed his own filmmaking language, based on a musical conception of editing and a symbolic use of colour. Son of Greek immigrants, mythology shaped his imagination. Psyche or Twice a Man – a film that won an award at the EXPRMNTL Festival in Knokke-le-Zoute in 1963 – are all based on the idea of integrating myth in a contemporary setting. Markopoulos is also one of the first filmmakers to explicitly address the topic of homosexual identity. In 1967, total devotion to his vision of cinema leads him with his companion filmmaker Robert Beavers, to leave the United States and settle in Greece. This exile is accompanied by the decision to withdraw all his films from circulation. Markopoulos then brings them all together in a major and ultimate work: Eniaios, previewed to last 80 hours. The screening could only take place on the site of Temenos, near the birthplace of his father. Although Eniaios was never completed during his lifetime, the project of an ideal site where Markopoulos’ work can be seen in harmony with the landscape is maintained by Robert Beavers who strives to make this a reality since the death of his companion by organising every four years, screenings of new segments of Eniaios that he has been able to process and print. This programme coincides with the publication of the book Film as Film: The Collected Writings of Gregory J. Markopoulos. Edited by curator Mark Webber and published by The Visible Press (London), the book compiles nearly a hundred rare and unpublished texts, in which Markopoulos reflects on his filmmaking as well as that of authors like Dreyer, Bresson and Mizoguchi.” (Xavier Garcia Bardon)

Visit the calendar for details of each screening, or view the programmes on the Courtisane and Cinematek websites.