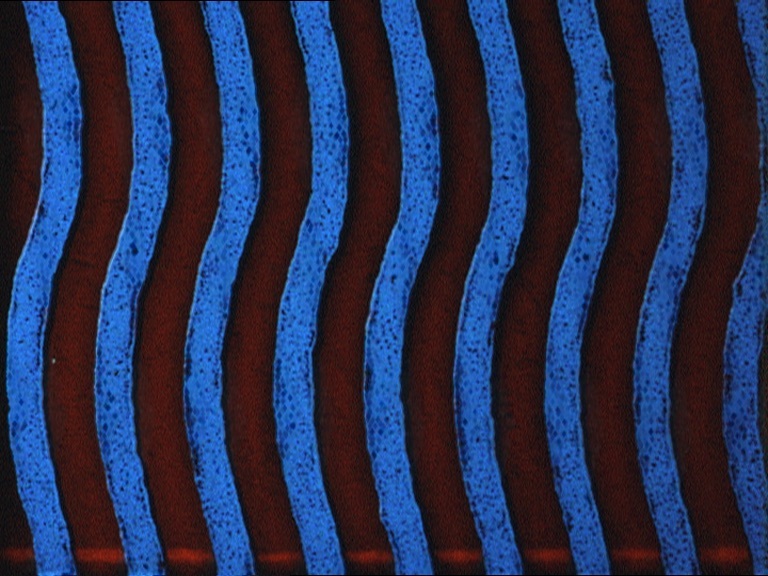 Light Industry presents an evening devoted to Lis Rhodes, occasioned by Telling Invents Told, a new collection of her writings published by The Visible Press and edited by María Palacios Cruz. Rhodes was one of the key figures to emerge from the London Film-Makers’ Co-operative in the 1970s, where she and her contemporaries helped advance a radically reflexive approach to film aesthetics, investigating the medium and its mechanics in fundamentally material terms. Consider, for instance, an early effort like Dresden Dynamo, in which vibrant graphic patterning within the 16mm frame is also read by the optical track, allowing the viewer to see the work’s sounds, to hear its images. Yet for Rhodes formal experimentation has always been animated by a feminist consciousness. “The grammar of looking and the grammar of language,” she has explained, “are both a set of power relationships,” and both are explored in Light Reading, a turning point in her filmography. Here a Steinian voiceover is laid down beside tangles of text printed on celluloid as well as a series of photographs—among them a blood-stained bed—which are repeated, reframed, and sometimes torn to pieces; the site of female subjectivity is analyzed like a crime scene.

The political questions manifest in Light Reading would soon extend beyond the screen. In 1979, Rhodes, along with artists like Mary Pat Leece, Annabel Nicolson, Felicity Sparrow, and Susan Stein, withdrew her work from the Hayward Gallery’s “Film as Film: The Formal Experiment in Film, 1910-1975,” protesting the marginal role of female filmmakers within the exhibition. As part of the action, Rhodes penned the influential essay “Whose History?” which was included in the show’s accompanying publication. “Film history defined by men necessarily positions women outside of its concerns,” she wrote. “Women appear, but on whose terms? Within whose definition? Apparently historical accuracy is based upon acceptable ‘facts,’ that is those facts that are the concern of men. Unacceptable ‘facts’ are forgotten or rearranged… Women filmmakers may or may not have made ‘formalist’ films, but is the term itself valid as a means of reconstructing history? Is there a commonly accepted and understood approach?” Following the “Film as Film” intervention, Rhodes, Sparrow, and others founded Circles, an organization that supported filmmaking by women through screenings, group discussions, and developing the first distribution catalog in the UK to focus solely on work by female artists, which at its height featured over two hundred titles.

Looking back at the Circles catalog, and its entry for Pictures on Pink Paper, one encounters a succinct description of Rhodes’s project more broadly: “In Lis Rhodes’ closely textured work, pictures and meanings are experimented with, brought richly together or pared down to abstraction in order to challenge and re-create. She shows us how the apparent inevitability of ‘the natural’ and immutability of ‘the normal’ are held neatly in place by those to whom such an order is of advantage. Pictures on Pink Paper is—women talking, thinking aloud and questioning this order; a critique of past experiences and ways of thinking, interwoven with the images and sounds from places remembered. There are numerous threads and layers, of possibilities and contradictions, as the film moves between what is heard and what might be spoken; was known and is now seen.”