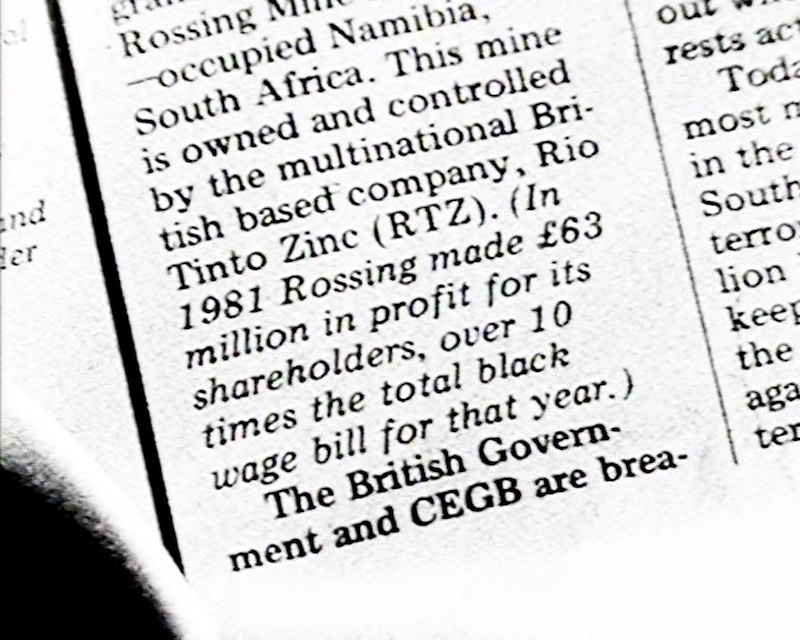 Since the 1970s, artist Lis Rhodes has been making radical and experimental work that challenges dominant political and social narratives and the power structures of language. Her films and writing address urgent political issues – from the refugee crisis to workers’ rights, police brutality, racial discrimination and homelessness – as well as film history and theory, from a feminist perspective. A key figure in the development of the London Film-Makers’ Co-operative, Rhodes was also a founding member of Circles, the first British distributor of film, video and performance by women artists.

“Her films comprise one of the most radical rethinkings of experimental film and politics of the last fifty years; they are like flashbulbs, exposing the physiognomies of power in the cracks of everyday experience. Her writing is both an integral part of her extraordinary filmmaking and a continuation of it. Partisan and sceptical, lyrical and hopeful, it is a voice of resistance to reality as it has been told or sold to us.” (Mike Sperlinger, Oslo Academy of Fine Art)

Timed to co-incide with the publication of the first collection of her writings, Telling Invents Told (The Visible Press, 2019), the screening at CAST surveys four decades of Rhodes’ practice; from her formal experiments with optical sound in the 1970s and the feminist essays of the 1980s to her contemporary political analysis work.

The programme includes screenings of: Dresden Dynamo 1971-72, possibly Rhodes’ most famous work, an experimental  film made without a camera, with an audio composition created by printing images directly on the soundtrack area of the film; A Cold Draft 1988, in which drawings, negative landscapes and images of architecture are overlaid with the spoken narrative of a woman under surveillance; Running Light 1996, a work that investigates the enforced labour of migrant farmworkers, using footage originally taken by Rhodes and fellow filmmaker Mary Pat Leece in 1985 on a visit to West Virginia; In the Kettle 2010-12, which brings together images of protest and surveillance from London’s recent past.

The screening at CAST spans four decades of Rhodes’ practice and will be introduced by María Palacios Cruz, Deputy Director of LUX and editor of Telling Invents Told. Copies of the book will be available for purchase at the event.

Lis Rhodes uses film, performance, photography, writing and political analysis to explore the impact of language on perceptions, interactions and social relationships. Rhodes attended North East London Polytechnic and the Royal College of Art, and has taught at the RCA and the Slade. The publication of Telling Invents Told coincides with the major exhibition Lis Rhodes: Dissident Lines at Nottingham Contemporary (May to September 2019). A previous career survey, Lis Rhodes: Dissonance and Disturbance, was held at the ICA in 2012. Rhodes received the Paul Hamlyn Foundation Award for Artists in 2012 and the Freelands Award in 2017. She lives and works in London.

María Palacios Cruz is a London-based film curator, co-founder of The Visible Press, Deputy Director at LUX, and a programmer for the Punto de Vista and Courtisane festivals. She is the course leader for the Film Curating programme at Elias Querejeta Zine Eskola (San Sebastian) and has previously taught at Kingston University, Central Saint Martins, École de Recherche Graphique and Académie Royale des Beaux-Arts de Bruxelles.